"This has been talked about, debated about constantly by international, national, local press, media, by the whole hospitality, culinary field, all of it . . . This has been going on forever."
Two long years, actually, but Chicago Mayor Richard Daly's comment said it all as he watched the City Council vote 37-6 to overturn the city's ban on Foie Gras, which he once called "the silliest law...ever."
FoieBlog commends the unyielding efforts of Chicago Chef's for Choice and the Artisan Farmers Alliance in battling this ban into oblivion and showing the animal activists that they are a force to be reckoned with. Alderman Joe Moore passed the ban in a sneaky legislative move back in April 2006, but his defeat was both public and embarrassing, and should send a message to those who would so blithely take away their constituents freedom of choice to quiet the voices of a few extremists.
We all involved well as they take the fight to Sacramento to overturn California's ban on Foie Gras, which is set to go into effect in 2012.
Hopefully it won't take that long.
Posted by Gras Guy at 9:58 AM No comments:

FOIE FREEDOM IN THE FREE STATE

After being force-fed the facts by the Maryland Restaurant Association, Artisan Farmer's Alliance, and the state veterinarian, legislators in both the Assembly and Senate of Maryland decided to pull bills that would've banned the production and sale of Foie Gras in the state.

"We may have gone too far," was how Senator Joan Carter Conway, put it as she tabled the bill she sponsored, and that pretty much sums things up.

Activists annoyed their representatives into introducing the legislation, but well-reasoned arguments from sensible voices showed them the light.

Kudos to the coalition that stood against this absurdity. They say 99% of success is just showing up, but 1% solid information doesn't hurt.

FoieBlog looks forward to enjoying some Foie Gras Crab Cakes Encrusted With Old Bay Seasoning - if anyone is brave enough to make it.
Posted by Gras Guy at 12:36 PM 3 comments:

FoieBlog would like to apologize for our extended absence. A recent reader e-mail reminded us that we've been remiss in our duties.
Alas, while some aspects of life outside of cyberspace (which we won't bore you with) have distracted us from our mission of late, rest assured, we're still here, and hope to be stirring up trouble again soon.
In the meantime, GrasGuy did something recently that was either unfortunate or ill-advised. We'll recount it as a cautionary tale.
On a inclement winter night he had a craving for a hearty cassoulet, but, being the lazy gourmand that he is, he wasn't about to drag the family out into the bitter cold to satisfy his craving.
It wasn't really a problem, though, because in Manhattan everything is available via delivery.
So it was that with a quick check of the internet, he was able to place an order for a plate of Duck Leg Cassoulet with Coco beans and Sausage from one of his favorite local eateries, Brasserie Julien.
Of course, he couldn't leave it at that.
While perusing the online menu, his eye was drawn to the appetizer list, topped by a Terrine of Foie Gras with Apple and Calvados Chutney and Glaze.
Foie Gras, via bicycle? Did he dare?
He did.
The site of the Foie Gras through the plastic lid of the delivery container was only slightly more appetizing than when it was uncovered and it's adehsion to the aluminum surface was in full view.
Most people would have shut the lid, and shut out the memory of this travesty, but for GrasGuy, Foie Gras left uneaten is Foie Gras that never existed at all.
Surprisingly, it was good.
Not surprisingly, there were consequences.
We will not recount them here.
Other food had been consumed that day, much of it likely of questionable origin given GrasGuy's propensity to eat things even Andrew Zimmern would think twice about, but the finger of suspicion must point to the terrine.
Somehow we don't think this will stop him from placing another order if a similar mood should strike again.
If so, we hope something else won't strike again either.
Posted by Gras Guy at 9:55 AM No comments:

If you're a subscriber to the Wall Street Journal, be sure to check out today's article (12/14/07) on the battle over Foie Gras.

Several famous chefs give Wolfgang Puck's efforts against Foie Gras a well-deserved dressing down, including Anthony Bourdain, who proves once again nothing can hold back his tongue.

"I think he should stop worrying about cruelty to animals and start worrying about all the customers he's flopping his crap on at airports...He got squeezed and pressured and phone-called from all angles, and like a good German shopkeeper he folded and sold out the people hiding in the cellar next door. I got no respect."

Yep, nothing like referencing the Holocaust the raise the level of a debate. At least he didn't swear.

Daniel Boulud and Jaques Pepin also toss their two cents into the mix - though with a bit more reserve - and the article actually gives the Foie Gras supporters the kind of fair shake you don't see much in the broadsheets.

FoieBlog is sure it's only a coincidence that this article appeared on the first full day of Rupert Murdoch's ownership of the paper, aren't you?
Posted by Gras Guy at 3:32 PM No comments:

TONY DISHES IT OUT

Once upon a time Anthony Bourdain went to his brother's house for the holidays, and put on a pretty good show in the process. So scripted, so contrived, so entertaining.

And he did a good deed for Foie Gras along the way.

Sure, the fair and balanced way he went about it - stacking the deck with our favorite purveyor, D'Artagnan's Ariane Daguin, and that cuddly old veterinarian of unknown credentials for his in depth expose of Foie Gras production at Hudson Valley Foie Gras - made Fox News look like NPR, but what the heck, it sounded good to us. And damn if that Foie Gras didn't look tasty - even those crazy kids from Queens of the Stone Age looked like they were enjoying it.

Once again Bourdain provides us with a reasonable sounding argument in support of Foie Gras. No, he won't convince everyone. As he says, there are "these f****** people [who] are not really all about us not eating duck liver. No, no, no. They don’t want us eating any animal product whatsoever," and they're a lost cause. But if you listen to Uncle Tony, the next time you run into a flock of them, at least you'll have some verbal ammo to go hunting with.

Happy Holidays!
Posted by Gras Guy at 9:15 AM No comments:

Boy, the things having a kid will do to you.

FoieBlog isn't sure if Tony will be leading his family in a rendition of the Ramones' "Merry Christmas (I Don't Want To Fight Tonight)", but we hear everyone's favorite holiday treat - Foie Gras - will be featured on the menu he's preparing, as he travels to deepest darkest Connecticut - via D'Artagnan and Hudson Valley Foie Gras - for Thanksgiving with the family.

Bourdain has been over many rivers and through countless woods these past few years, but we're sure nothing has prepared him for this.
Posted by Gras Guy at 2:32 PM No comments:

BUT STEAMING CRABS TO DEATH ISN'T A PROBLEM?

The Veggie Vigilantes are putting the squeeze on Maryland, and at least two chefs don't have the stomach for it.

The Columbia Reporter reports that Michel Tersiguel of Tersiguel's French Country Restaurant in Ellicot City will be taking Foie Gras off his menu with the New Year after members of the Baltimore Animal Rights Coalition threatened to start protesting out front. The Iron Bridge Wine Co. - run by Steve Wecker - in nearby Columbia has also cleared it's kitchen of Foie Gras after complaints from customers. Such a shame to see these guys go down without a fight. Tersiguel said he had no choice, and it was a "no-win situation for us."

Just ask AAEFAAA award winner Parind Vora of Jezebel Restaurant in Austin, Texas, who has been fending off a twice a week protest for several months now and is no worse for wear.

Yes, it's easy for us to say go for it since we don't run a restaurant ourselves. Just don't be surprised, Mssrs. Tersiguel and Wecker, when you're faced with another "no-win situation." The name of the group is the Baltimore ANIMAL Rights Coalition. Not the Baltimore NO FOIE GRAS Coalition.

Actually, they'll be at Louisiana Restaurant in Baltimore on Dec 7th where you can currently get a Veal Tenderloin En Croute Stuffed With Foie Gras Over Wild Mushrooms With Madeira Sauce and Truffle Oil.

Perhaps it's time to buy stock instead of Foie Gras.
British supermarket chain Waitrose has introduced a new faux gras product. The Scotsman reports that after taking Foie Gras off it's shelves six years ago, the purveyor has developed a pate that includes the naturally fattened livers of free range geese and ducks - raised in, of all places, Foie Gras-free Britian.
Hmm, sounds to us that someone at Waitrose got this idea after reading Pateria De Sousa's press. In any event, FoieBlog will continue to follow this development, as this "alternative" has now spread to at least three countries (UK, Spain, and Schiltz Goose Farms in the USA).
While we have yet to try any of this ourselves, most reviews say it's an alternative, but far from a replacement for Foie Gras. Still, our accountant is starting to think we should get in to this business on the bottom floor. It's no Google, but maybe our retirement will have to settle for Goosegle.
Posted by Gras Guy at 9:48 AM No comments:

OK, so it's not Foie Gras, but while going through the giblets from our Thanksgiving turkey, we couldn't help but toss a bit of the liver in a pan and have an impromptu snack. 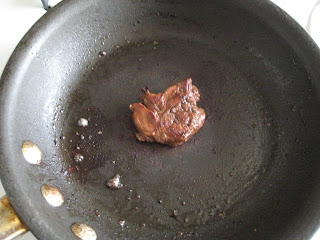 Not as good as the real thing, but with a little olive oil and rock salt, not too bad either - and still better than a dry turkey.
Happy Thanksgiving!
Posted by Gras Guy at 11:34 AM No comments:

Ahh, the holidays in New York City, there's truly nothing like it anywhere else. The Rockefeller Christmas tree, Tiffany's crystal snowflake over Fifth Avenue, and, of course, carolers from Farm Sanctuary.
FoieBlog passed by Fairway on Manhattan's Upper West Side yesterday and was greeted by the latest chapter in the on again, off again No Foie Gras protest outside one of the cornerstones of the city's culinary heart. Thankfully, the activists didn't seem to be making much headway with the throngs of shoppers coming in and out of the store, and FoieBlog was actually impressed by the level of decorum being exhibited by the protesters - at least at the time we were there.
Come on, guys, do you really think such a flaccid exhibition is going to sway anyone to your side? At least try to come up with some catchy holiday-themed slogans, or hire a Santa Claus to attract attention to your efforts. Oh, that's right, you probably don't agree with his enslavement of reindeer and diminutive humans.
In any case, FoieBlog readers in the neighborhood can show their support by dropping in the the store and picking up a bit of Foie Gras in one of the many forms available, including a very easy and affordable 2 medallion package from D'Artagnian.
It makes a great gift for your favorite bloggers. (Hint, hint)
Posted by Gras Guy at 9:31 AM No comments: